Page features citations, publications and biographical information on recipients of higher degrees at The University of the West Indies, Mona Campus

Citation for recipients of the Doctors of Science (DSc) Honorary Degrees conferred by The University of the West Indies.

The UWI Mona awards the Doctor of Science, an honorary degree commonly conferred on persons in recognition of their contributions to the creative arts, scholarly output and other achievements mostly in the humanities.

This page features recipients of the Doctor of Letters with the citations read on their award and relevant resources available through the Mona Library: 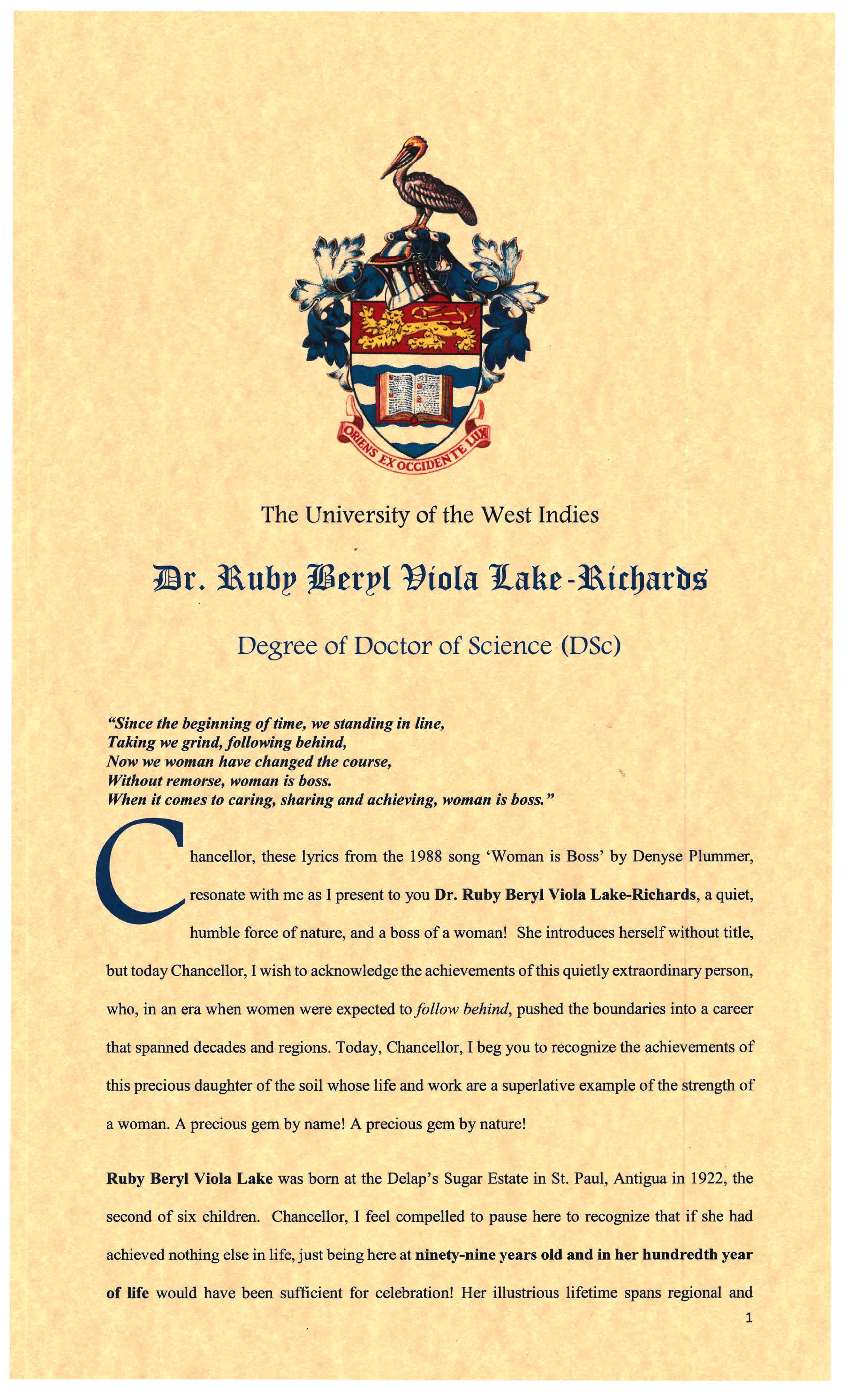 Dr. Ruby Lake-Richards, was born at Delap’s Sugar Estate in Antigua in 1922. She was among the first cohort of medical students at the University College of the West Indies (now The UWI Mona) in Jamaica in 1948. She worked as a Medical Doctor in Antigua in the late 1950s/early 1960s, often making house calls and dealing with sickness and death.

A proud Antiguan, Dr. Lake-Richards ensure her family grew anchored in the culture and traditions of her country even while living in Canada. Through her work, she exemplified value and beauty in everyone often placing the welfare of her patients above her own.

The Degree of Doctor of Science was issued to Dr. Ruby Lake-Richards, on the Five Islands Campus on July 31, 2021.

Prof. Lenworth Jacobs made outstanding contributions to the field of trauma surgery and management. Jacobs is the founder and National Director of the Advanced Trauma Management (ATOM) course, which has facilitated over 1200 surgeons receiving certification in 26 sites across North America, the Middle East and West Africa. Prof. Jacobs had a hearty appreciation for sharing his knowledge with over 180 papers published and 200 presentations locally and across the globe.

Among his numerous accolades, was the West African College of Surgeons Honorary Fellowship awarded in 2007 for service to African Surgeons by implementing ATOM in West Africa.

Prof. Lenworth Jacobs was conferred with the Doctor of Science Degree in November 2011. 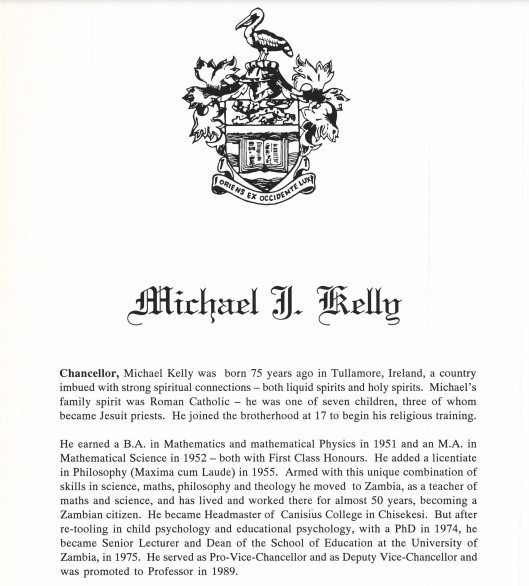 Michael Kelly was an outstanding, game changing  individual who was born Tullamore, Ireland. Michael Kelly came from a family who was invested in their Catholic faith and he began his religious training at 17 years old.

Kelly was one with a very impressive educational background earning a B.A. in Mathematics and Mathematical Physics. He furthered his studies by attaining a M.A. in Mathematical Science and licentiate in Philosophy and 'retooled' in child and educational psychology being a PhD holder. Michael J. Kelly worked as a Headmaster of Canisius , Chisekesi, Senior Lecturer and Dean of the School of Education at the University of Zambia. He went on to serve as Pro and Deputy Vice Chancellor and Professor.

Michael Kelly played a key role in researching and writing about AIDS. He was vital in raising awareness and dedicated the rest of his life in lecturing and partnering with bodies such as UNESCO, UNISEF, World Bank, DFID and OXFAM. As this world changer would say " HIV/AIDS is a weapon against education, but education is a weapon against HIV/ AIDS.

On October 23, 2004, Michael J. Kelly was conferred with a Doctor of Science Degree by The University of The West Indies. 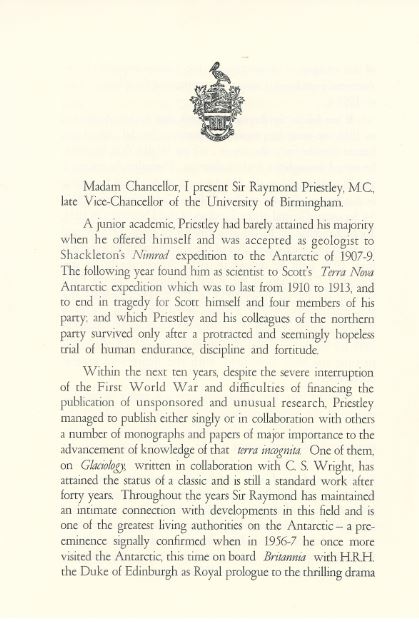 Sir Raymond Priestly, M.C., was integral to the birth of The University College of the West Indies (UCWI). Sir Raymond gave an address at the presentation of the first graduates of the UCWI in January 1953. There he encouraged all present to continue to value education and become builders of their countries.

Raymond Priestly served as Principal and Vice Chancellor for The University of Birmingham. One of his great achievements was being appointed Chairman and of the Royal Commission of the Civil Service.

Raymond Priestly, M. C., was conferred with an honorary Doctor of Science degree by The UWI Mona Campus.

Dr. Cicely Williams, began her studies in medicine with her Somerville College, Oxford and undertook her clinical work at King’s College Hospital in London. She graduated with Bachelor of Medicine and of Surgery of Oxford in 1923. Facing gender discrimination, it was difficulty for Williams to gain a position in a hospital, but she was eventually able to gain experience that fostered her lifelong fascination with childhood health and nutrition.

She joined the Colonial Medical Service in the Gold Coast in 1929, where she became the first medical officer to gain specialist training in the care of children’s diseases. When she left the Gold Coast in 1936, she became the first Lecturer in Child Health at the College of Medicine, Singapore. Dr. Williams was captured upon the surrender of Singapore to the Japanese and was imprisoned from 1942 – 1945. In 1948, she was appointed Head of the Department of Maternal and Child Health of the World Health Organization in Geneva and in 1950-51 went to New Delhi as Asian Regional Director.

The University of West Indies conferred the honorary degree, Doctor of Science on Dr. Cicely Williams. 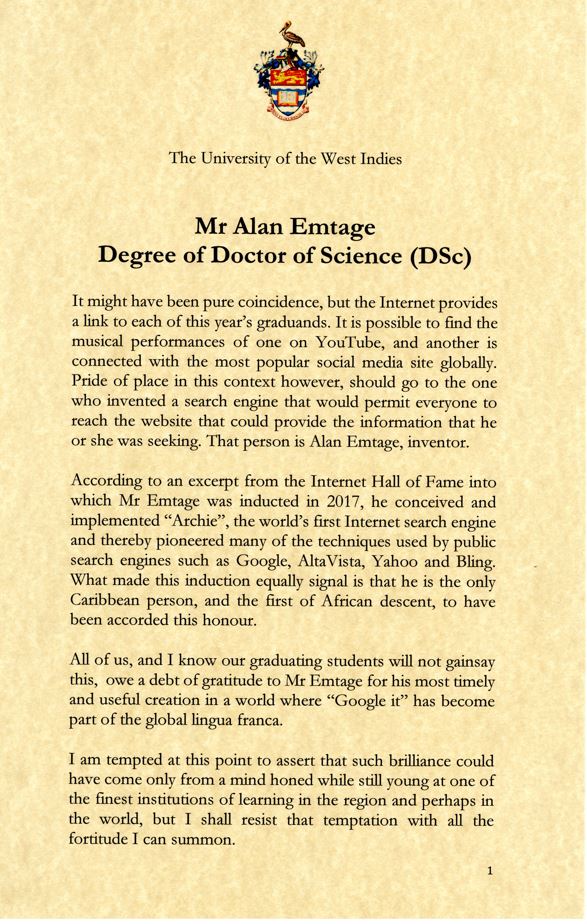 Mr. Alan Emtage, inventor, attended Harrison College in Barbados from 1975 - 1983, winning the prestigious Barbados Scholarship in 1983. He pursued his undergraduate and Master's degrees at the McGill University in Computer Science.

In 1989, Emtage conceived and executed "Archie", the world's first search engine, precursor to popular platforms such as Google, Bing and Yahoo. He was the first person from the Caribbean and of African descent to be placed into the Internet Hall of Fame. As co-founder of Bunyip Information Systems, he was at the helm of the first company providing inforation services to the World Wide Web. As a founding member of the Internet Society and chair of the Internet Engineering Task Force, he was also integral to the establishment of standard for Uniform Resource Locators (URLs).

Mr. Alan Emtage was conferred with the degree, Doctor of Science on October 19, 2019. 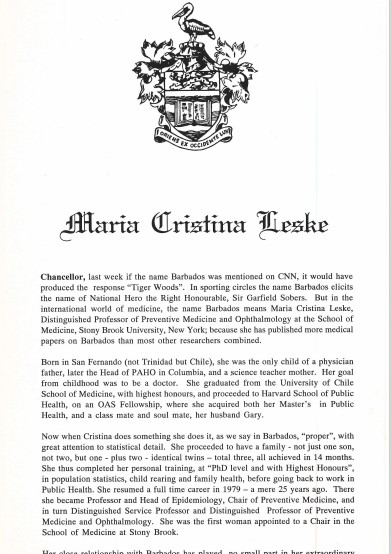 Maria C. Leske was born in San Fernando, Chile. Her father worked as a Physician and mother a Science Teacher. Maria Leske graduated from the University Of Chile School Of Medicine with a First Class Honors. Leske later attained a Master’s degree in Public Health from the Harvard School of Public Health.

On October 23, 2004, Maria C. Leske was conferred with Doctor of Science Degree from The University of The West Indies.