Library Open Week showcases the outstanding work of the Mona Library. The week’s events engage with all stakeholders in our community and network. The signature event of the week is Celebration of Books which highlights the work of UWI authors who publish 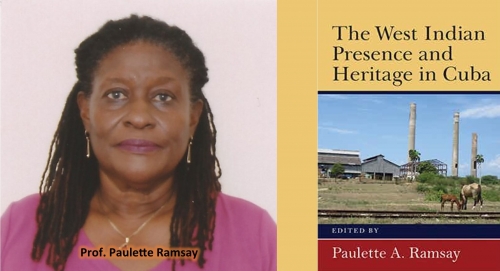 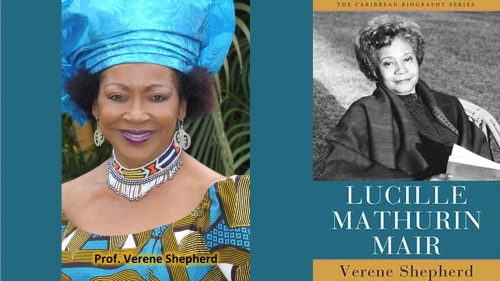 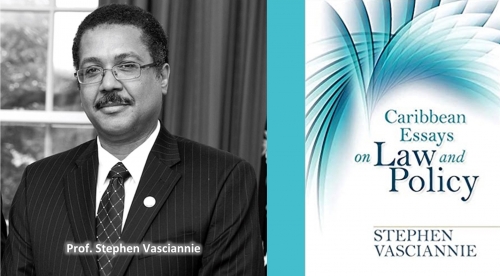 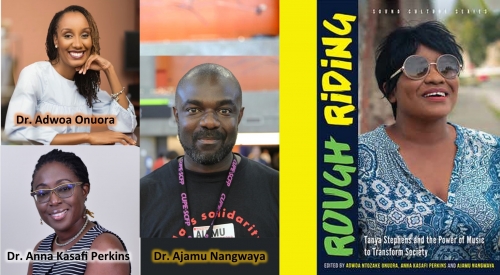 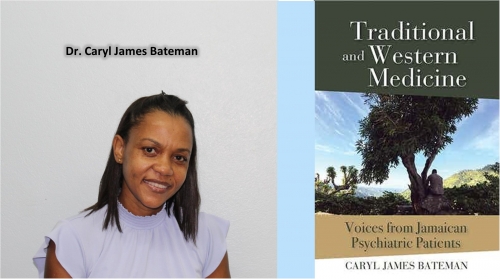 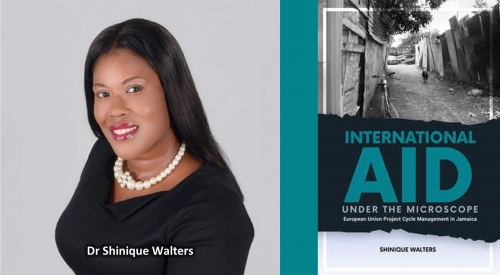 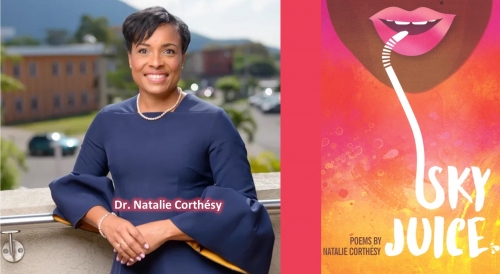 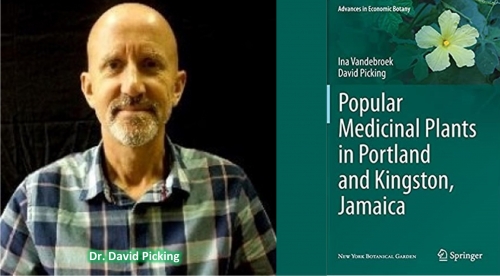 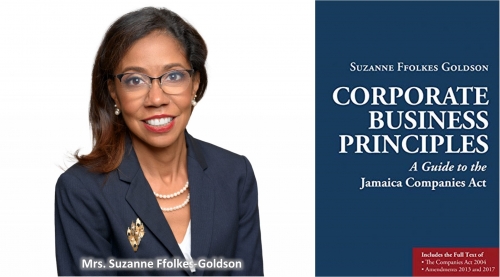 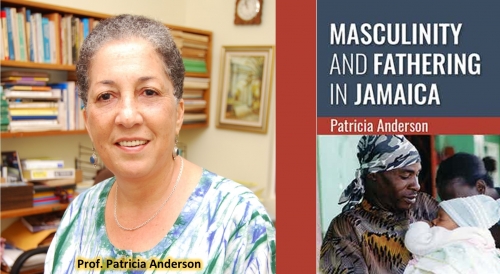 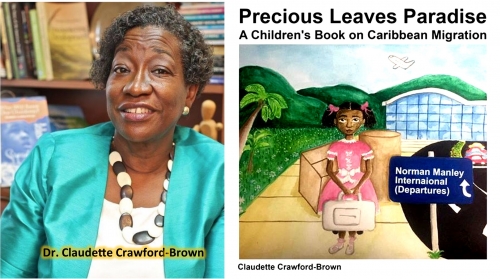 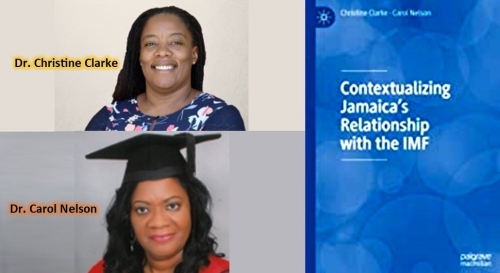 Prof. Stephen Vasciannie  is Professor of International Law at The University of the West Indies, Mona. He holds the office of Commander of the Order of Distinction from the Government of Jamaica, and has been Jamaica’s Ambassador to the United States of American and the Organization of American States. He has also been Principal of the Norman Manley Law School. Professor Vasciannie’s most recent publications include: Arguments and Facts: Caribbean Public Law, Governance, Economy and Society (2016) and The International Law Workbook (2016).

Dr. Christine Clarke is a lecturer in the Department of Economics at The University of the West Indies, Mona. She serves on the Board of the Bank of Jamaica, Jamaica’s central bank, and she has worked at the Planning Institute of Jamaica in various capacities, from Economic Advisor to the Director-General to the Director of Economic Planning and Research.

Her publications include Wage Determination in Jamaica: An Exploration of Pay Gaps using the Census in Social and Economic Studies Dec 2015 and Pay Disparity and Ethnicity: Evidence for Belize Men, coauthored with A. Bellony and B. Reilly in 2015

Dr. Nelson worked as a director with the Government of Jamaica, effectively coordinating and implementing various initiatives and activities with regards to international and regional financial institutions. She served on the Board of the Caribbean Development Bank (CDB) and CARICOM’s Council for Finance and Planning and the CARICOM Commission on the Economy. In 2010 she represented the Caribbean region in 2010 on the UN Committee for Programme and Coordination at the United Nations.

Her 2012 thesis entitled “The "practice of power in the partnership": the discourse of the memorandum of understanding 2004-2006 and the implications for the public sector and industrial relations practice” advances theoretical perspectives such as Actor Network Theory and Critical Discourse Analysis not commonly applied to Caribbean phenomenon as methodological tools of analysis.

Mrs. Suzanne Ffolkes-Goldson is an Attorney-at-Law and Senior Lecturer in the Faculty of Law at The University of the West Indies, Mona. She specializes in Corporate Governance, Economic Crime, Company/Corporate Law and Corporate Management. Mrs. Ffolkes-Goldson has presented extensive research on Company/Corporate law, Corporate Governance, Corporate Insolvency and Corporate Social Responsibility at numerous seminars, workshops and conferences, locally, regionally and internationally, and has published a number of articles in regional and international journals on these subjects. Her previously published book, Commonwealth Caribbean Corporate Governance explores the development of the law and codes in Jamaica, Barbados and Trinidad and Tobago and the wider Commonwealth Caribbean.

Dr. Shinique Walters is a lecturer in the Department of Government, Faculty of Social Sciences, The University of the West Indies, Mona. She is also a Research Fellow at the Centre for Leadership and Government.

Prof. Verene Shepherd, C.D., is a Professor of Social History at the Mona Campus of The University of the West Indies. Director of the Centre for Reparation Research and Vice-Chair of the CARICOM Reparations Commission, she is also the host of Jamaica’s first weekly radio history education programme Talking History on Nationwide 90FM.  Influenced by the work of Lucille Mathurin Mair and other gender history scholars, Professor Shepherd has distinctly identified herself with the movement to re-centre women in historical discourses and to work towards clarifying the roots of fractured gender relations in the Caribbean.

In 1994, Professor Shepherd published her first academic work, Transients to Settlers: The Experience of Indians in Jamaica, 1845-1950. In 1995, she published Engendering History: Caribbean Women in Historical Perspectives, (co-edited with Barbara Bailey and Bridget Brereton). In all, she has published eighteen authored/co-authored/edited/co-edited books. Some of her academic works target the high school students who take the Caribbean Examinations Council (CXC) Secondary School’s examinations, including Liberties Lost: Caribbean Indigenous Societies and Slave Systems (2004) and Freedoms Won: Caribbean Emancipations, Ethnicities and Nationhood (2006). Both books were co-authored with Sir Hilary Beckles, a Barbadian historian and the current Vice-Chancellor of The UWI.

Dr. Patricia Anderson. Retired. She was a senior lecturer of Applied Sociology in the Department of Sociology, Psychology and Social Work. Faculty of Social Sciences, The University of the West Indies, Mona. Dr. Anderson has produced a body of work that covers important sociological and demographic topics. She is the author of Minibus Ride: A Journey Through the Informal Sector of Kingston’s Mass Transport System, and several chapters in a range of books/publications. Her articles have appeared in a number of journals including Labour, Capital and Society and Social and Economic Studies as well as in prestigious edited collections such as The Urban Caribbean: Transition to the New Global Economy and Caribbean Families: Diversity Among Ethnic Groups

Dr. David Picking is currently a postdoctoral Research Fellow at the Natural Products Institute at The University of the West Indies, Mona. His research focuses on the contemporary use of medicinal plants by Jamaicans with the aim of supporting the development of a strong evidence base for safe medicinal plant use within the Jamaican healthcare system and to support the development of a successful Jamaican nutraceutical industry. His publications include: Potential Drug Interactions for Commonly Used Medicinal Plants and Foods in Jamaica. Handbook for Healthcare Professionals (2015).

Dr. Claudette Crawford-Brown a lecturer with the Department of Sociology, Psychology and Social Work, The University of the West Indies, Mona, is also known as a clinical social worker and child welfare consultant. Her innovative direct intervention strategies have led to landmark publications on Caribbean children, adolescents and families. Dr. Crawford-Brown is an advocate for training and consultancy on Teaching Methodologies for Social Practitioners using the Creative Arts and Play as an Intervention for Social change. Her publications include her seminal work The “Barrel Children” of the Caribbean: the Socio-Cultural Context of the migrant Caribbean family.”

Prof. Paulette A. Ramsay is a Professor in the Faculty of Humanities and Education, at The University of the West Indies, Mona, Jamaica. She is an interdisciplinary academic, an established writer and researcher whose interests include Language Pedagogy, Writing Theories and Afro-Hispanic literature and culture. She has published many scholarly articles, mainly in the area of Afro-Hispanic literature and culture. Her post-doctoral work on Afro-Mexico, Afro-Cuba, Afro-Ecuador and Jamaican descendants in Ecuador has also been ground-breaking, with her book entitled Afro-Mexican Constructions of Diaspora, Gender, Identity and Nation being the first to interrogate issues related to the literary and cultural production of the forgotten Afro-Mexican people of Costa Chica and Oaxaca. This book received the Principal’s Award (2016) for Best Research Publication (Book). She has been the recipient of several awards including OAS, AECI Fellowships and the UWI 60 under 60 Award for outstanding research.

Dr. Caryl James Bateman is Associate Dean, Undergraduate Studies and Student Experience, Faculty of Social Sciences, The University of the West Indies, Mona. She is a senior lecturer, a clinical psychologist and an eating-disorder specialist. An advocate for raising eating disorder awareness in the Caribbean, she pioneered the first international conference in the Caribbean: Dying to be Beautiful: Body Image, Eating Behaviours and Health in the Caribbean in 2012.

Dr. Adwoa Ntozake Onuora lectures in the Institute for Gender and Development Studies, The University of the West Indies, Mona, Jamaica. She is the author of Anansesem: Telling Stories and Storytelling African Maternal Pedagogies.

Dr. Anna Kasafi Perkins is Senior Programme Officer, Quality Assurance Unit, Office of the Board for Undergraduate Studies, The University of the West Indies, Vice Chancellery, Regional Headquarters, Jamaica. Her publications include Justice as Equality: Michael Manley’s Caribbean Theory of Justice and Justice and Peace in a Renewed Caribbean: Contemporary Catholic Reflections (co-edited with Donald Chambers and Jacqueline Porter).

Dr. Ajamu Nangwaya is a former lecturer in the Institute of Caribbean Studies, The University of the West Indies, Mona, Jamaica. He is co-editor (with Michael Truscello) of Why Don’t the People Rise Up? Organizing the Twenty-First Century Resistance and (with Kali Akuno) of Jackson Rising: The Struggle for Economic Democracy and Black Self-Determination in Jackson, Mississippi.

Dr. Natalie Corthésy is a Lecturer, and Associate Dean (Outreach and Continuing Legal Education) in the Faculty of Law, The University of the West Indies, Mona. Sky Juice is Natalie Corthésy's second collection of poems after her debut anthology Fried Green Plantains (2017). The Watchman, Swansea, Siren and Ritual have been published in The Caribbean Writer Volume 33, 2019. "The Helper Experiment", Where are you from?, The School Girl, and Free have been published in The Caribbean Writer Volume 34, 2020. Up was published in the writing and visual art journal, We Are Goodgenough Magazine, 2020. Plantation fringe was contributed to a special commemorative edition of Interviewing the Caribbean honouring the work and life of Kamau Brathwaite, 2020.